Born in Birmingham in 1946 he went to school in the Midlands and later to college in Coventry where he graduated as a town planner. It was in the early years of his studies that Stuart was required to analyse townscape and he spent much time sketching street scenes. It was during this time that his fascination with townscape developed, but only in his early local government appointments did he have a opportunity to fulfil this interest. Nearly twenty years later, frustrated by the return of another Thatcher government, he left his well paid job and soon decided to try and make his way as a painter.

House portraits was Stuart’s starting point and after a successful first year, getting work, getting paid and developing his knowledge of water-colour, he was commissioned to paint a village. This he did in a style that has now become associated with him in order to meet the specific requirements of his client; ‘put this, that and the other in the picture please…’ This was his second capriccio painting and it gave him the idea to develop the style and paint other towns, make prints and hopefully sell them.

Capriccio townscape refers to the artist being capricious with the actual scene by placing buildings and landmarks in accordance with his feelings of composition. Canaletto and Francesco Guardi painted Venice in some way like this in the eighteenth century.

Stuart went from town to town around his home county of Cheshire creating compositions and publishing them as limited edition prints. The late Brian Redhead bought his original ‘Macclesfield’, and gradually his work was featured more in local press and magazines, then in the Daily Telegraph and on BBC radio and TV. His pictures also appeal to ex-patriots and have been bought for collections in at least 25 countries world-wide. The Prince of Wales added his ‘Chester’ print to his collection at St James Palace, and in 1994 The Queen had ‘Manchester’ hung at Buckingham Palace following her visit to the city. Witness to his success has been the growing number of artists imitating his capriccios and the very high price collectors pay for his original watercolours.

Stuart starts his compositions by walking round a town for days. “This is when I get to know my subject” he says, “I identify particular buildings, landmarks, features, colours etc. that may appear later in the composition.” He then takes hundreds of photographs and together with reference books, guides and plans he starts to draw the picture. This is not drawn to a rigid plan but develops organically as a pencil composition, he then uses ink and finally water-colour to bring it to life. Stuart always includes himself along with members of his family and his dogs in his paintings.

In recent years Stuart has concentrated on painting major cities, whilst in contrast he decided to move home and studio to a beautiful rural environment. The photo shows his Welsh hideaway lying between the sea and the Rhinog Mountains. As well as provincial English cities Stuart tackled London, which he has now painted four times as each limited edition has flown out of the galleries. His first overseas city was Sydney which has now been followed by Boston USA and Dublin. Requests to paint more and more cities are regularly received, but with his pictures taking around nine months to complete each new project has to be very carefully considered. 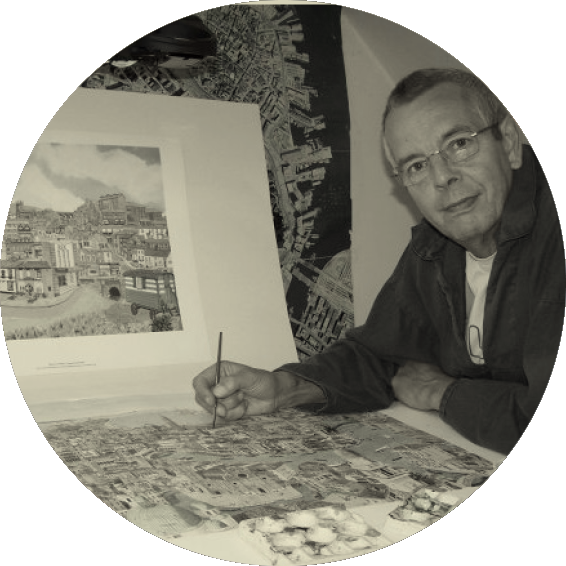